Babar Azam will lead the squad of six openers, 11 middle-order batsmen, three wicket-keepers, five spinners and 10 pacers and Mohammad Rizwan, who enjoyed a tremendous series against England with back-to-back fifties, has been named the new Test vice-captain. When it comes to the shortest format, leg-spinner Shadab Khan will be Azam’s deputy in New Zealand. 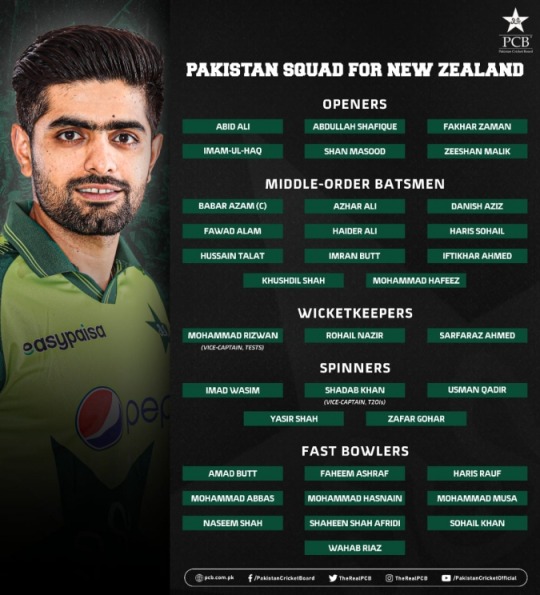 The teams will play three T20Is between 18-22 December, while the two ICC World Test Championship matches will get underway with the Boxing Day contest followed by the final game of the tour starting on 3 January. The Pakistan Cricket Board announced a combined squad, which includes players for the senior team and Shaheen side. It did not specify which player belongs to which squad.

A total of 35 Pakistan players and 20 officials will be heading to New Zealand next month for the three-match T20I and two-match Test series Down Under. The Pakistani selectors on Wednesday dropped veteran all-rounder Shoaib Malik and pacer Mohammad Aamir from a 35-member squad for the upcoming New Zealand tour. Left-arm pacer Aamir was also not considered for the recent home white ball series against Zimbabwe. He last played a Test in January 2019 and now below you can get the Pakistan Team Squad for New Zealand Tour 2020-21.