Interior Minister, Sheikh Rashid Ahmed, publicize that Prime Minister Imran Khan will open the e-passport service on Wednesday, 30 March 2022 in Pakistan. The launch of the e-passport is a important occasion and through this development, Pakistan would turn into one of the many countries to launch an e-passport through a chip installed on its data page, as it pushes to boost security and smooth international travel for its citizens.

The minister said the E-Passport holder would get benefit of E-gate facility at all airports all over the world and originally, E-Passport facility would be obtainable for diplomatic and government officials. The electronic passport which is in accordance through international standards will assist in the prompt and easy immigration of Pakistani citizens throughout their travel.

Throughout the world at all international airport, E-Passport may be used to access the e-gate service, according to the Minister. The initiatives included revamp online passport facility, fast track delivery service at zonal offices, up gradation of website of Director General of Immigration and Passports and inauguration of its official logo. 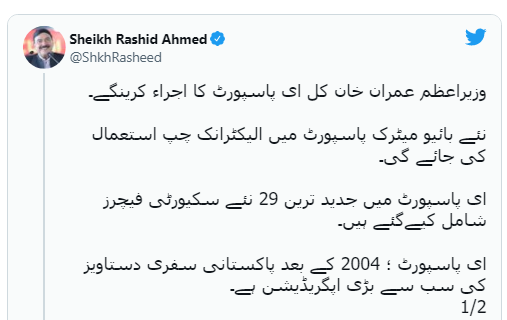 A microchip would be entrenched in each e-passport through all biometric information of an individual and it will also help to authenticate the individuality of the citizens whereas travelling. Addressing a ceremony in Islamabad on Wednesday to launch important initiatives by Directorate General of Immigration and Passports, Sheikh Rashid said this online facility will enable people obtain their passports at home without travelling and waiting in queue at passport offices.